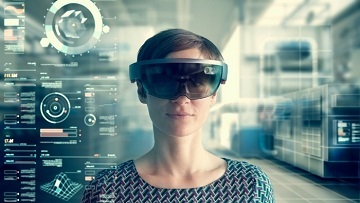 I was recently thinking about buying a new car. Before long, I realized that my thoughts had drifted well away from autonomous braking to designing networks. Say what you will, but we all have our quirks. Let me explain. When I think about purchasing a new vehicle, I not only consider what I need today, but also try and understand what I’ll require in a few years. Designing a network is somewhat similar, because everyone wants to get as much mileage out of their physical infrastructure as they possibly can.

When looking at new technologies that are driving network design, augmented reality (AR) and virtual reality (VR) really stand out. As I’ve realized over the past few months, AR and VR are no longer limited to science fiction movies. As a matter of fact, both AR and VR are readily accessible, with real-world use cases spanning a diverse range of applications and verticals. Although we won’t spend a lot of time exploring AR/VR uses cases, I’d like to briefly discuss how networks will be impacted by virtual and augmented reality in an enterprise environment.

Put simply, reducing latency and increasing bandwidth will become even more of a priority. Latency, or the time that passes between a request and answer, is extremely important for AR and VR applications. This is because data needs to be seamlessly relayed to ensure a truly immersive experience. Specific examples include overlaying virtual objects on top of the real-world objects and enabling 6 Degrees of Freedom (6DoF). The latter refers to tracking rotational and translational motion, which is particularly important for VR applications. With 6DoF, headsets can track if the user has turned their head left or right, moved it up or down, pivoted left and right, or moved forward, backward, laterally, or vertically. Indeed, object overlays and 6DoF both require quick responses from a private/public AR cloud.

CLICK TO TWEET: Blake Van Scoy explains what you should do to eliminate bottlenecks in your network for AR and VR applications.

Bandwidth has always been a key requirement, although it is becoming even more important as enterprise-class networks struggle to meet the data demands of users leveraging AR/VR applications to complete their daily tasks. As an example, 4K video streaming requires ~25mbs throughput. When multiplied by the number of users per node, bandwidth demand quickly starts to increase. If the field of view narrows, buffering kicks in to prevent jitters, making it difficult for algorithms to precisely predict movements. To prevent jittering and ensure a consistently immersive experience, networks must deliver considerably more bandwidth per user than is offered by aging network infrastructure.

Looking beyond AR and VR applications, backend network infrastructure should be upgraded to support a new generation of bandwidth-hungry edge devices and Wi-Fi 6 access points (APs). Indeed, all of these new technologies can benefit from multi-gigabit switches, Cat6A cabling and OM5 fiber layer 1 products. As applications become ever-more mission critical, IT departments need to proactively ensure that networks aren’t the bottleneck in 2019 or five years into the future.

In conclusion, I think it is fair to say that most people don’t want to buy a new vehicle every two years. So, when planning a network deployment or cyclical upgrade, IT departments should consider new applications and make sure backend infrastructure, from switches to cabling, is as future proofed as it possibly can be. Now I don’t mean to be rude, but I’m going to put away my Blue Book and put on my VR headset instead. Let’s catch up on the next blog!

Blake Van Scoy is a Market Solution Manager on the Enterprise Strategy and Technology team.  Blake has more than 18 years of experience in telecommunications and networking. Prior to joining CommScope, he spent nine years in Nortel’s Wireless Training and Documentation group. He has a bachelor of science degree in business administration from Embry-Riddle Aeronautical University, Daytona Beach campus.

The importance of tower top infrastructure in an Open RAN paradigm

Open RAN is accelerating the global availability of 5G across various deployment models and strategies. In this blog, Colin Bryce explores the importance of tower top infrastructure in an Open RAN paradigm.