After about 10 months, and four stages of forward and reverse auctions, the 600 MHz incentive auction concluded on February 10, 2017 with the block assignment phase wrapping up on March 30. Once the dust settled, the final band plan ended with 70 MHz of spectrum divided among 50 wireless licensees for a gross price of nearly $20 billion.

To make way for this new wireless allocation, 175 TV stations will receive over $10 billion to either go off the air, share their channel with another station or move to a VHF channel. This makes way for a total of 555 stations to take up to 39 months (beginning on April 13, 2017) to vacate TV channels 38 – 51 (this is based on a FCC 10 phase transition schedule). Figure 2 shows the breakdown for each of the phases including stations being reassigned below channel 37. 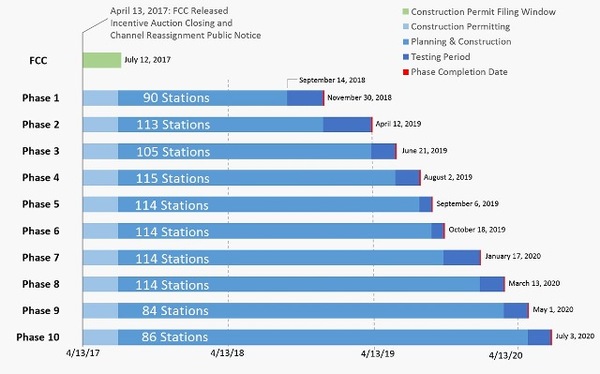 This number does not include the roughly 2,300 secondary low power TV (LPTV) stations that are in channels 38–51. As a result of their secondary status, LPTV stations are also required to accept interference from wireless operations should they choose to stay put. However, wireless licensees must give them at least 120 days’ notice to LPTV licensees that may cause interference.

There are also about 70 fixed Broadcast Auxiliary Service (BAS) stations that must cease operating or relocate, at their own expense. They must do this by the end of the transition period or earlier if a wireless licensee finds there is a likelihood of harmful interference from the fixed BAS station.

And lastly, the Wireless Medical Telemetry Service (WMTS) operates in TV channel 37, which is nearly adjacent to the 600 MHz band (see Figure 3). The FCC provided a 3 MHz guard band between channel 37 and block A to protect WMTS operations. Although the FCC did not impose specific restrictions, they did “encourage new 600 MHz licensees to be cognizant of the presence of WMTS facilities when designing their networks and when possible to take measures to minimize the energy directed towards them.” See FCC 15-69, paragraph 119.

Luckily, there are tools out there to help with the analysis and manage the LPTV notifications, such as Comsearch’s TVclear. TVclear determines impairments so deployments can move ahead now. It includes software and project management services that show where network operators can place new cell sites. Complete this brief form to learn more, or leave me a comment with any questions.

Laura Fontaine is the director of interactive solutions at Comsearch. She has nearly 25 years of experience in the field of spectrum management and the evaluation of spectrum sharing and spectrum relocation. Comsearch has provided innovative spectrum management and wireless engineering solutions to the global market for fixed, mobile, and broadband wireless applications for over 35 years.

Let’s talk about 5G and AI

The rollout of 5G is having a positive impact on the evolution of artificial intelligence, as both smartphone manufacturers and mobile developers eye a new generation of powerful AI capabilities and applications. Mike Wolfe explains in this blog.